Ethnic Studies, as a field and as a department, was born of struggles against racial violence, settler colonialism and imperialism. It was only institutionalized because of Third-World student-led organizing efforts to hold universities accountable for their histories of exclusion, discrimination, neglect and intellectual erasure. Drawing on generations of radical thinkers, we are committed to centering racial justice in our teaching, research and community engagement. We stand in solidarity with UCR Demands to Administration-Call to Action as well as the international Movement for Black Lives. While the current crisis exposes the violent realities of systemic anti-Black racism in the United States, we recognize that institutions of higher learning have reproduced and legitimized laws, policies and practices of anti-Blackness in society.

We therefore call on UCR administration to not only address the Demands’ specific concerns regarding the current crisis, but also critically confront anti-Black racism in institutional policies, programs, practices, and all aspects of university life. The UCR Ethnic Studies Department has expanded its community engagement focus and is actively working to support existing and new-found grassroots organizations that seek to end anti-Black racism and racist systems of policing, criminalization, and detention. We call on the UCR administration to institute substantive policy changes coupled with sustainable commitments to academic resources to proactively combat systemic racism and support ongoing struggles for a better future for all peoples. This would include defunding UCPD and establishing community-led safety programs.

The Ethnic Studies Department welcomes continued engagement with the student organizations that have created the UCR Demands to Administration in order to build strong collaborative relationships towards eradicating anti-Blackness within our department, university, communities, and in the world, as we amplify Black voices and Black scholarship in all programming. We call on the UCR administration to affirmatively commit greater institutional resources and funds toward these efforts under the guidance of Black students, staff, faculty, and community members. We further call on the UCR administration to adequately fund and support Black Studies by dramatically increasing the number of Ethnic Studies hires in Black Studies with the goal of educating our students and producing knowledge for the world to contribute towards the eradication of anti-Black racism.

Are you having trouble exercising during the quarantine? The UCR Ethnic Studies Mutual Aid Collective is now providing quarantine workouts! See flyer below for more details.

If you would like to participate in our mutual aid collective by providing and receiving support, please sign up at this link: https://forms.gle/FZEJoYNPGs78dhkn8 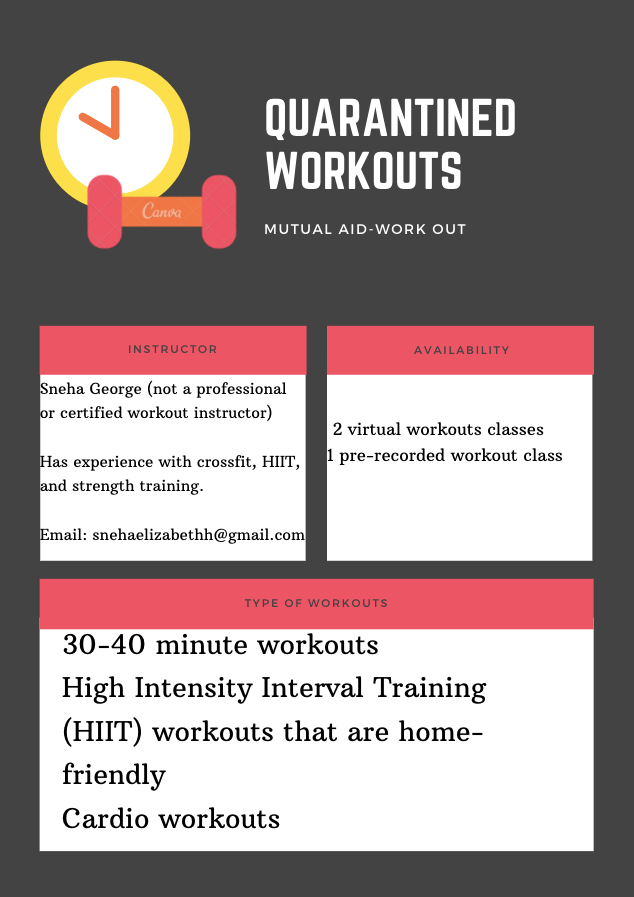 Students from UC Riverside’s Ethnic Studies Organizing Clinic started a new organization, On the Rise, to provide mentorship and support for low-income students in the Riverside area to go to college.

They are also organizing a fundraiser to provide scholarships for low-income Riverside-area students attending college next year. Support here!

We, the faculty of UC Riverside Department of Ethnic Studies, stand in firm solidarity with graduate students across the UC system in their demands for a cost of living adjustment (COLA) and the unconditional reinstatement of all UC Santa Cruz graduate student workers who were summarily terminated and disciplined in retaliation for their participation in a wildcat strike. We support the students currently engaged in a wildcat strike, as well as future strike actions that may be authorized by UAW Local 2865.

We further express our continued support of the graduate students should they vote to authorize an Unfair Labor Practices (ULP) strike. We urge the UC to engage in good-faith collective bargaining directly with UAW Local 2865 to avoid a system-wide graduate student strike that would severely impact every aspect of UC operations.

We condemn the UC administration’s use of militarized policing and violent force in responding to graduate student strike and protest actions. These measures demonstrate that the UCSC administration and UC Regents set little value on the health, well-being, and labor of precarious graduate student workers, particularly those vulnerable to deportation, detainment, or imprisonment because of their citizenship status.

Graduate student workers are essential to the collective mission and success of the UC system. They should be granted compensation that recognizes their contributions to the educational and research mandates that maintain the UC as a preeminent public university system, in a state with some of the highest costs of living in the country.

We urge the university to make every effort to curtail the ongoing and potential future disruptions this is causing for UC undergraduate and graduate teaching, as well as campus-wide research activities, by engaging in good-faith negotiations with the UC graduate students and UAW Local 2865.

At 18, UC Riverside Professor Edward Chang immigrated to the United States. He had two goals: To learn English and get an education. Decades later, Chang has been awarded the Order of Civil Merit, one of the highest medals from the Republic of Korea, for his academic research promoting Korean culture in both the U.S. and South Korea.

The Order of Civil Merit is the fourth-highest medal given by the South Korean government. It is an annual award based on the recipient’s extensive services in the areas of politics, society, economy, education, art, or science in the interest of promoting national development.

Chang, a professor of ethnic studies and founding director of UCR’s Young Oak Kim Center for Korean American Studies (YOK), received his award for his academic research of Riverside’s Pachappa Camp at a ceremony in San Bernardino’s Koreatown in October 2019.

Through research, Chang discovered that the Pachappa Camp on Cottage Street in Riverside was the first Korean settlement in the United States.  The City of Riverside recognized the camp as its first point of cultural and historical interest in 2016 with a sign at the camp’s former location. Chang described it as one of the most important projects of his career.

“The Pachappa Camp was previously unknown until I published a book last year. No one knew of its existence, in Korea or the U.S…” Chang said. “I began to understand this is the first and largest Korean settlement at the time. It was a mecca of Korean independence and held sentiments of a family-based community…In a sense, it laid the groundwork for the early Korean-American immigrants.”

Chang’s project began with a Riverside map from 1905 which showed a Korean settlement. The area was founded by Korean independence activist Ahn Chang Ho. The community thrived, with job opportunities, religious services, and families with about 100 people calling it home until 1918. Chang and his research team confirmed the existence of the Pachappa Camp by collecting historical newspaper articles, a membership list from a local Korean church, and checking tombstones at a nearby cemetery.

Chang has also left a large impact on UCR’s campus by founding the Young Oak Kim Center for Korean American Studies in 2010. It was established for faculty and students to continue studying the culture and heritage of Korean-Americans.

Chang named the center after Young Oak Kim, who was a second-generation Korean-American who fought during World War 2 and the Korean War. Kim was a war hero who fought for the rights of minorities, women, orphans, and adoptees. Chang described Kim as a champion of civil rights who served as a role model for future generations.

“Working at the center helped me when I studied abroad in South Korea earlier this year,” said Jacqueline Aguirre De La O, a student intern at the YOK Center. “His research solidified my knowledge of Korean-American migration by moving away from the black-and-white binary, which I implement into my own courses in sociology.”

“Because of Professor Chang’s guidance and tutelage, I have really flourished and grown,” said Carol Park, YOK Center Administrative Assistant and Researcher. “Without his instruction and mentorship, I don’t think I would be where I am today. He is the kind of professor that most students dream to have.”

Prof. Gerald Clarke has been appointed the Teresa and Byron Pollitt Endowed Term Chair for Interdisciplinary Research & Learning in the Humanities and Social Sciences. Assistant Professor in Ethnic Studies, Gerald Clarke is a renowned and award-winning Cahuilla artist, co-organizer of the recent Neo- Native: Towards New Mythologies symposium, and longtime educator and speaker on Cahuilla history and culture. His work has been exhibited throughout the United States and is included in several prominent museum collections including the Autry Museum of the American West, the Heard Museum, and the Eiteljorg Museum. Clarke received his M.F.A. in studio arts with an emphasis in painting and sculpture from Stephen F. Austin State University in Nacogdoches, Texas.