Naomi Waters – Ernesto Galarza Award: Presented annually to a junior Ethnic Studies major in recognition of service to the community

Ethnic Studies, as a field and as a department, was born of struggles against racial violence, settler colonialism and imperialism. It was only institutionalized because of Third-World student-led organizing efforts to hold universities accountable for their histories of exclusion, discrimination, neglect and intellectual erasure. Drawing on generations of radical thinkers, we are committed to centering racial justice in our teaching, research and community engagement. We stand in solidarity with UCR Demands to Administration-Call to Action as well as the international Movement for Black Lives. While the current crisis exposes the violent realities of systemic anti-Black racism in the United States, we recognize that institutions of higher learning have reproduced and legitimized laws, policies and practices of anti-Blackness in society.

We therefore call on UCR administration to not only address the Demands’ specific concerns regarding the current crisis, but also critically confront anti-Black racism in institutional policies, programs, practices, and all aspects of university life. The UCR Ethnic Studies Department has expanded its community engagement focus and is actively working to support existing and new-found grassroots organizations that seek to end anti-Black racism and racist systems of policing, criminalization, and detention. We call on the UCR administration to institute substantive policy changes coupled with sustainable commitments to academic resources to proactively combat systemic racism and support ongoing struggles for a better future for all peoples. This would include defunding UCPD and establishing community-led safety programs.

The Ethnic Studies Department welcomes continued engagement with the student organizations that have created the UCR Demands to Administration in order to build strong collaborative relationships towards eradicating anti-Blackness within our department, university, communities, and in the world, as we amplify Black voices and Black scholarship in all programming. We call on the UCR administration to affirmatively commit greater institutional resources and funds toward these efforts under the guidance of Black students, staff, faculty, and community members. We further call on the UCR administration to adequately fund and support Black Studies by dramatically increasing the number of Ethnic Studies hires in Black Studies with the goal of educating our students and producing knowledge for the world to contribute towards the eradication of anti-Black racism.

Join ETST’s Critical Antiiviolence Research and Action for its monthly Transformative Justice book discussion, I Hope We Choose Love: A Trans Girl’s Notes From the End of the World by Kai Cheng Thom

If you would like to be on CARA’s listserv to receive information on events, email CARA at criticalantviolence@gmail.com 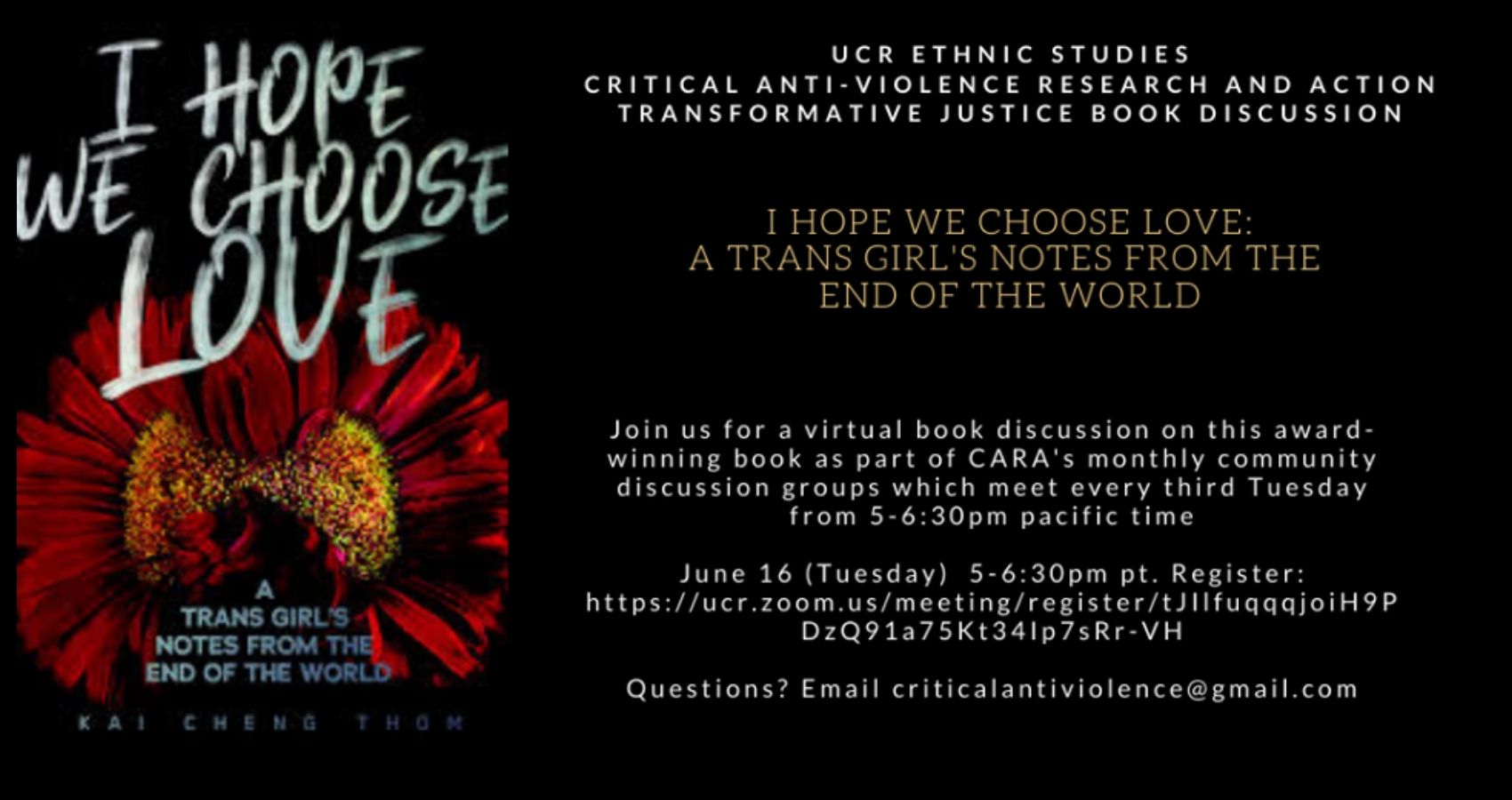 We, the faculty of UC Riverside Department of Ethnic Studies, stand in firm solidarity with graduate students across the UC system in their demands for a cost of living adjustment (COLA) and the unconditional reinstatement of all UC Santa Cruz graduate student workers who were summarily terminated and disciplined in retaliation for their participation in a wildcat strike. We support the students currently engaged in a wildcat strike, as well as future strike actions that may be authorized by UAW Local 2865.

We further express our continued support of the graduate students should they vote to authorize an Unfair Labor Practices (ULP) strike. We urge the UC to engage in good-faith collective bargaining directly with UAW Local 2865 to avoid a system-wide graduate student strike that would severely impact every aspect of UC operations.

We condemn the UC administration’s use of militarized policing and violent force in responding to graduate student strike and protest actions. These measures demonstrate that the UCSC administration and UC Regents set little value on the health, well-being, and labor of precarious graduate student workers, particularly those vulnerable to deportation, detainment, or imprisonment because of their citizenship status.

Graduate student workers are essential to the collective mission and success of the UC system. They should be granted compensation that recognizes their contributions to the educational and research mandates that maintain the UC as a preeminent public university system, in a state with some of the highest costs of living in the country.

We urge the university to make every effort to curtail the ongoing and potential future disruptions this is causing for UC undergraduate and graduate teaching, as well as campus-wide research activities, by engaging in good-faith negotiations with the UC graduate students and UAW Local 2865.